Biggest 2-days ever for SMBs on Amazon.in on Prime Day 2020

This Prime Day was dedicated to our small business (SMB) partners, who have been increasingly looking to Amazon to keep their businesses running. We are humbled that we were able to help as this was our biggest Prime Day ever for small businesses

Small and Medium Businesses (SMBs) and Prime members on Amazon.in discovered joy like never before on Prime Day making it the biggest 48-hours for SMB sellers, for new member sign-ups, and for engagement with Prime benefits.

From big brands to home grown businesses, all are ‘Primed’ for D-day

With the highest ever SMB participation, over 91,000 SMBs, artisans, weavers and women entrepreneurs from over 5,900 pin codes saw success during Prime Day 2020. Of these, more than 62000 sellers were from non-metro and tier 2/3 cities across India. 31,000 SMB sellers witnessed their highest sales ever with over 4000 SMB sellers each registering sales of INR 10 lakhs or more, and 209 SMB sellers becoming crorepatis during the 48 hours. Artisans and weavers who sell their unique handmade collection through Amazon Karigar store witnessed a growth of 6.7X, and women entrepreneurs from the Saheli program witnessed a growth of 2.6X over average day sales. Similarly, startup brands under the Launchpad program grew by 2.1X over their average day sales. Over a thousand Local Shops from over 100 cities made their Prime Day debut, growing by 2X over average day sales. Over 1 million Prime members shopped from small businesses in the 14-day lead up to Prime Day, further helping them with their business revival.

This Prime Day saw members from over 97% pin codes of India shop across multiple categories. More than twice as many customers signed up for a Prime membership during Prime Day 2020 compared to the last Prime Day, with over 65% of new members from outside of the top 10 cities including towns like Kullu in Himachal Pradesh, Leh in Ladakh, Dholpur and Sirohi in Rajasthan, Koraput in Odisha, Mokokchung in Nagaland, Garo hills in Meghalaya, Gadag in Karnataka, Nagappatinam in Tamil Nadu and Panna in Madhya Pradesh.

“This Prime Day was dedicated to our small business (SMB) partners, who have been increasingly looking to Amazon to keep their businesses running. We are humbled that we were able to help as this was our biggest Prime Day ever for small businesses – nearly 1 Lakh SMB sellers (70% from small towns) received orders from across 97% of India’s pin-codes; Karigar artisans, Saheli women sellers, Launchpad entrepreneurs, and Local Shops enjoyed their highest ever day of sales,” said Amit Agarwal, SVP and Country Manager, Amazon India. “We are overwhelmed by the response to Prime, with twice as many customers (65% from outside of the top 10 cities) signing up for membership compared to last year, and more members enjoying the benefits of shopping, new product launches, and entertainment during the event than ever before.”

“I have witnessed the biggest surge in my entire lifetime of selling on Amazon. Not only it was surprising but a dream fulfilled. We saw jaw dropping numbers on Prime Days and it exceeded our projections by 10X. Focused on made in India quality and professional and superior supply chain due to Amazon has made me deliver my products to the length and breadth of the country right from Leh Ladakh to Port Blair down south. It was the glory we dreamt of when we incepted the brand.” - Arjun Sood, Dream of Glory Inc., an apparel brand under Launchpad.

Aman Gupta, Co-Founder, boAt said “We received a phenomenal response during this year’s Amazon Prime Day sale. Once again, our boAtheads showered us with immense love making boAt a top audio brand in India. This sale was distinctively special for us as we launched our 'Made in India' power banks which became best sellers during the sale. It is indeed a gratifying moment for an Indian brand like us. We hope to strengthen our partnership with Amazon and bring more amazing products to the boAthead community.”

· Personal Computing, Large Appliances, Kitchen, Smartphones, Apparel and Pantry categories were among those that saw the most success in terms of units sold.

Prime Reading to look forward to, this Prime Day

· Large appliances saw favour with members with top selling brands being LG, IFB in washing machines; Whirlpool, Samsung in refrigerators; LG and Panasonic in air conditioner and IFB in microwave in kitchen and home appliances.

· Members actively shopped for fitness at home products - treadmills and home gyms saw a spike and the launch of Decathlon products on Amazon were immensely popular.

· Summer wear and home/ lounge wear were among the most sought after in apparel with Jockey, USPA, Biba and Max as top-selling apparel brands. Beauty and self-care was also on the mind of members. Top-selling beauty brands were Dove, WOW, L’Oreal, Mamaearth, Indulekha, Vaseline, Parachute, Lakme and Nivea.

· Fire TV Stick with Alexa Voice Remote was the #1 best seller on Prime Day. Customers bought as many Fire TV Stick devices on the first day of Prime Day this year versus the entire Prime Day event last year.

· Alexa took 3X more requests from customers to pay their mobile, electricity and other bills and mobile recharges on the Amazon Shopping app (Android) during Prime Day compared to an average day.

· On Prime Video Amazon Funnies - Prime Day Special, the all-day laughter fiesta saw 14 stand-up comedians, each performing a set of ten-minutes, with a Stand-Up set being released every hour on the service between 10 AM to 11 PM on 7th August.

· Prime Video’s reach and appeal continues to grow and the service is now watched in over 4300 towns and cities, across the length and breadth of India.

· More members streamed Prime Music than ever before in the week leading up to Prime Day, with members streaming music in over 50 languages (20+ Indian and 30+ International language) on Prime Music in the lead-up period.

· During the lead up to Prime Day, the most streamed celebrity curated playlists were Ayushmann Khurrana, Shankar Mahadevan, Madhuri Dixit, Ajay Devgn and Anne Marie.

· In the lead up to Prime Day, the most streamed songs on Prime Music were ‘Main Tumhara’ in Hindi, ‘Dance Monkey’ in English, ‘Lamberghini’ in Punjabi, ‘Chellamma’ in Tamil and ‘Buttabomma’ in Telugu.

· Prime Day Kindle titles by best-selling authors Preeti Shenoy (Somebody that I used to know), Ashwin Sanghi (Sauvastika – The Struggle of Shantiputa), and marketing guru Ambi Parameswaran (Brand - brewing the magic potion in 5 steps) were the top eBooks borrowed.

The invention of metal by early societies became a hallmark of civilization. Even to this date, the knowledge, skill and expertise connected with different metals from various regions of India have been carried over by generations of artisans as a legacy. Explore the wonders from deep under the earth.
Continue reading
Supporting small business

Weave a handmade tale into your Diwali story

India was a ‘golden bird’ not just for its precious stones and heritage, but also for the rich history and tradition of its dexterous weaves that continue to attract global attention to this day. This festive season, don’t just buy a handmade piece, bring home a living heritage for generations to savour.
Continue reading
Devices

Introducing the all-new Echo family — reimagined, inside and out

Echo Dot, Echo Dot with clock, and Echo feature all-new spherical designs, now have improved audio quality & bass. All Echo devices are built with recycled materials, and will support low power mode for energy savings...
Continue reading
7 years and it's still Day 1!
As Amazon.in turns 7 in India, its journey has been marked by many memorable moments - big and small. As we turn a year older and grow bigger, we ask Amazonians to tell us how they strive to keep alive the Day 1 culture.
Continue Reading
X
Out for Delivery
Thank you!
Please try again
Quick news and rich insights from inside Amazon, delivered directly to your inbox every few weeks.
Check your inbox shortly for your very first Out for Delivery email. We’ll reach out every few weeks with more.
If you’re not redirected back to the blog in a few seconds, click here.
Looks like we had some trouble authenticating your entry. Let’s try again...
Amazon Privacy Policy | Opt out anytime
Return to video player ➡ 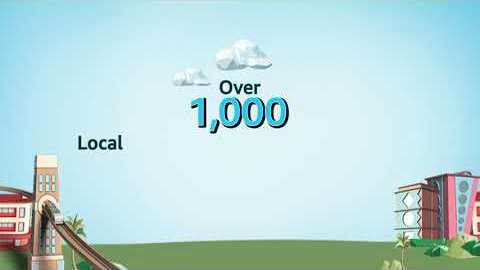