From a routine job to routine writing: The journey of KDP author MV Kasi

Living the mundane 9 to 5 IT job was not enough for MV Kasi! She keeps herself passion driven by writing engaging romantic tales to brighten up every reader’s day.
By Day One Staff

Having little time in her hand due to her bustling office schedule, MV Kasi found no time to market her book or reach out to publishing houses. Therefore, she chose a self-publishing service - Amazon Kindle Direct Publishing (KDP) to put out her novel on the most sought digital reading app of Kindle. This idea of self-publishing her book was inspired by the author Rasana Atreya after which she tried it out and realized the process is very simple. Her motive at that time was just to make her family and friends read the manuscript she had drafted but little did she know that her book would gain a worldwide audience.

Romance with a twist

MV Kasi’s books are not usually lovey-dovey romance, they are contemporary romance novels that explore human psychology. In one of the very early interviews in 2017, she mentions that she was fascinated with successful people who were not considered ‘normal’ by society.

MV Kasi was overwhelmed by the response and shifted in changing her hobby of writing into a full-time profession. She made an author page on Facebook to interact with her readers. To promote her book and also set a deadline for herself she puts her upcoming projects into a ‘pre-order’ facility for readers. She releases small snippets of her book to get readers interested and promotes it across all social media channels like Instagram and Twitter. That’s her key marketing strategy.

MV Kasi currently has a list of 20 published books. Self-publishing through KDP on Kindle has given her a good start and a great reader base. She began publishing on KDP in April 2016 and this hobby has now become her profession in helping her get a steady income as well as gain fame. Beginning from just her friends and family reading her copies, now a huge audience is a fan of her writing of human psychology in romantic situations. Her topics usually cover the underdogs of society along with human psychological motivations.

A planner, a ninja of words as well as an observer, MV Kasi highlights a sense of humor in her writings to engage readers in heavy topics.

Her message for aspiring writers is to ‘build good stories’ in order to develop a huge reader base. She finds Kindle Direct Publishing easy to use and we believe the greatest takeaway for any writer through this story is to ‘just begin’.

Self-publish with KDP for free
Kindle Direct Publishing
How did you like this story?
Yawn
It's OK
It's Good
It's Great
I love it!
65 Ratings
Thanks!
Supporting small business 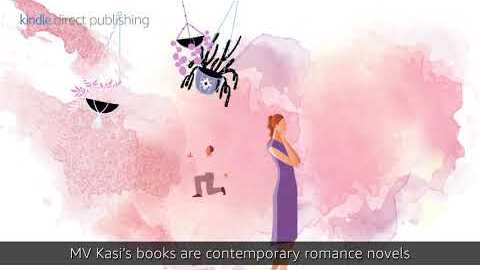 From a routine job to full-time writing: The journey of KDP author MV Kasi