A civil engineer by profession, Aishwarya Sajeevakumaran had a zeal for writing and published 22 books in less than a year. Find out how Kindle Direct Publishing helped her.
By Day One Staff

Having heard of the self-publishing site from her friend in August 2019, Aishwarya was excited to self-publish books that she had written previously, but couldn’t find a way to publish. Before this, she wrote 9 books in 9 months and was disappointed when she could not make a single penny from them. Aishwarya then became desperate to push her work out to a larger audience who would appreciate her flair for writing and give her the readership she craved for. Since then she has published 22 books on the website and has been routinely adjudged as one of the top writers on the site. Participating in the Amazon KDP Pen to Publish Contest was a huge booster for her as well, and she was one of the finalists of the contest.

Publishing her work under the pen name Aadvika Pommu, her Tamil novels have created a storm on the site and drawn the attention of lovers of regional literature. Aishwarya fondly shares her memory of her first paycheck that she received from the site for her books, and how truly happy and accomplished she felt on that day. What is astonishing is how quickly KDP has allowed her to command a loyal fan base and the astronomical rise in her royalties is proof of it.

I am a civil engineer, and now I am earning more from KDP than my salary.

The going gets tough...

Things were not always smooth sailing for this brilliant author. Initially when she started writing, her family was not supportive of her passion, since it did not bring any income into the household. Her incredible success on KDP and the stable revenue source that the site has given her access to, was instrumental in getting her family to back up her love for writing, since they finally saw the value in it. In fact, when her husband lost his job in the US due to COVID, she helped pay his rent and keep him on his feet with her KDP earnings, on top of paying her down payment for her car with the money she made through her books on KDP.

Back on her feet

Aishwarya is overjoyed at how this stable income source has helped her transform her life, and has supplemented her income from her full time job as a civil engineer working in irrigation. She is thankful for the love and appreciation that readers of Tamil literature have showered on her after reading her books on Kindle apps and devices. She feels KDP is a golden opportunity for budding writers who can’t approach a publishing house for whatever reasons.

She recommends all those who secretly want the world to read their work but do not have the means or know how to publish their work, to get on KDP and self-publish their writing. We are delighted to have writers like Aishwarya pave the way for others who are writing in regional languages and keeping these languages alive through their fresh new stories.

Self-publish with KDP for free
Kindle Direct Publishing
How did you like this story?
Yawn
It's OK
It's Good
It's Great
I love it!
150 Ratings
Thanks!
Supporting small business 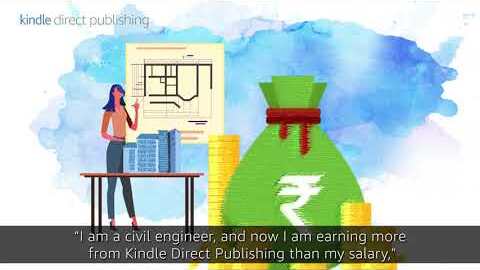