(Extremely) behind the scenes with Amazon Stories in Leh, India.
By Neal Karlinsky

As a former journalist, I’ve been to war zones, natural disasters of essentially every category and am generally hard to surprise in the gonzo travel department — but flying into the Himalayan town of Leh, India almost felt like landing on another planet.

For starters, you have to acclimate to the altitude upon arrival. Our team was advised to head straight to the hotel from the airport and do nothing but “rest” for two days in order to let our bodies adjust to the sparse oxygen levels. I thought that seemed ridiculous, until we got there and felt the invisible punch in the gut of roughly 11,500 feet.

What Amazon brings to Leh, India

Or was it something more than that? A 2011 article I read on the way over said that scientists had coined the region “the worst place in the world for altitude sickness.” We ended up getting to work after only one day of “rest,” but we sure weren’t moving very fast. We were also all on altitude medication, which may have helped.

There are some stories that you objectively understand and go about the business of telling, and there are some that really hit you over the head with the sheer weight of their reality. This was the latter. Driving around Leh’s bumpy roads, dodging cattle, packs of dogs, and the occasional mule, surrounded by a 360-degree view of the world’s highest peaks, all of us were blown away that Amazon was actually delivering here.

For starters, if you’re lucky enough to have a working cell phone, good luck finding an address with the help of a digital map. Local knowledge rules the road and keeps Amazon’s budding delivery station humming with simple precision. That’s helped fuel an added element to the deliveries in this normally isolated mountain region — old-fashioned customer service.

Again and again, we met customers who’ve become friends with Amazon’s new delivery team in Leh. They know each other and have personal relationships in such a unique and almost quaint way that’s refreshing to see.

An Amazon customer in Leh

It’s also fascinating to see people with one foot fully and comfortably in their cultural past work so seamlessly with the digital present. We visited homes that only have electricity for a few hours a day, and yet they access their Wi-Fi and happily shop online during those periods of connectivity with the same ease and convenience as a family in Ohio.

So, while outsiders like a few of our fellow hotel guests nearly passed out and required supplemental oxygen at the dinner table, the people of Leh we met were getting on with the business of online shopping. From a monk, who took delivery of a football jersey at his temple, to a young woman who just wanted some fresh mascara — the real lesson of our trip to the top of the world (almost) is that, thin air aside, it’s not so different after all.

During our trip, members of our crew visited the Thiksey Monastery. Watch the video below to hear the monks’ morning prayer and see more of the people and places in and around Leh.

Sounds of Leh, India
Amazon PrimeWorking At Amazon
About the Author

Neal Karlinsky is a storyteller for Amazon & Senior Content Creator. He also loves eating chips.
How did you like this story?
Yawn
It's OK
It's Good
It's Great
I love it!
10 Ratings
Thanks!
Supporting small business 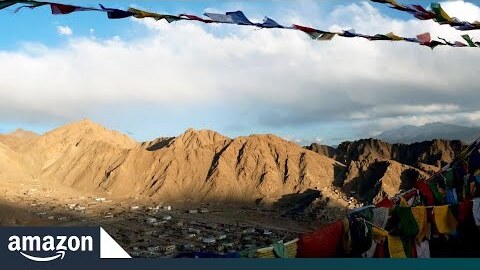 A gorgeous, grueling trip to the Himalayas