A house-on-wheels roadshow with over 600 products from Amazon.in celebrated sellers across India
By Day One Staff

The Great Indian Festival was flagged off with the #AmazonFestiveYatra – a unique “house-on-wheels” bringing the best of India together in one place.

We’re happy to provide a marketplace for startups, small businesses, emerging brands, weavers & artisans across India. Their passion inspires us every day. Here's what they have to say! #AmazonFestiveYatra@PiyushGoyal @CimGOI @DIPPGOI @ficci_india @startupindia @tribesindia pic.twitter.com/hCRaUeSsvd

With 3 special trucks, #AmazonFestiveYatra visited 13 cities covering over 6,000 kms throughout the festive season, providing a great opportunity for Amazon customers and sellers to engage, and share insights and opinions.

And India with its color and diversity never ceased to amaze. It brought us closer to our customers, our sellers, our partners. Across cities and towns as we got up close and personal with them – their stories never ceased to amaze. In fact, from the time the Yatra began Sept 16 from New Delhi, till its culmination on Oct 10 in Bangalore, we saw glimpses of India that gave us hope and happiness.

Whether it was people shopping online, streaming shows or simply using online payment methods – the ordinary Indian has jumped onto the “digital” bandwagon and how! If an e-rickshaw puller in Lucknow was swearing by the convenience of online shopping, a parking attendant in Mumbai was telling us how he buys shoes online for his folks back in Satna. While a seller was beaming as his art reached corners of India because he started selling online, an I Have Space partner was telling us how his earnings have improved after his association with Amazon

While the conversations with all of the people we had during the Yatra will remain etched in our memory, there are glimpses of it that you can see in these videos or in the Yatra pit stops below.

And as if engaging conversations were not enough, the fact that we got to see India in all its beauty and glory and experienced all weather conditions from rain swamped to pleasant, from cold and humid – made this Festive Yatra all that we had hoped for and much more.

Track the #AmazonFestiveYatra wth us

Track the yatra with us as we bring the colours, diversity and richness of India to you with city snapshots, customer videos and lots more. Stay tuned.

After an amazing 25 day road trip across India, the #AmazonFestiveYatra has reached Bengaluru, its final destination! The festive House-On-Wheels has showcased the best of Indian products from start ups, women entrepreneurs and artisans. Stay tuned for more! pic.twitter.com/a7NRFNSEzk

The #AmazonFestiveYatra is in the charming city of #Kochi. It’s not just us, but even ancient travellers have described it as one of the most beautiful cities in India.

Did you know that this major port city is the only place in India where fishermen use Chinese fishing nets? pic.twitter.com/Tgq6bgBd23

In Chennai, a seller told us how @amazonIN has helped him reach a larger market & the success he saw over the #AmazonGreatIndianFestival. We also met customers who love @alexa99 & @AmazonFireTVInd! #AmazonFestiveYatra

The #AmazonFestiveYatra is now in #Chennai, widely known as the gateway to South India. We’re excited to explore it’s rich culture and history. And its food of course! What are some of your favourite places in Chennai? #ChennaiDiaries #IncredibleIndia pic.twitter.com/W2grPGTExo

We had an amazing time in #Vizag and now we’re ready to go to our next destination. Guess what it is going to be? #AmazonFestiveYatra pic.twitter.com/tzG2A8PxEi

The #AmazonFestiveYatra is now in the beautiful port city of Vizag! Did you know that this city is home to India’s very first naval base? Stay tuned for more on our #Vizagdiaries! #Vishakhapatnam #Vizagcity #Vizag pic.twitter.com/BRmMs5hAi5

It was fantastic to visit some of #Kolkata’s old landmarks, and markets. #AmazonFestiveYatra pic.twitter.com/wSt6sv1Wyn

We’ve been exploring the #CityofJoy and loved the way this city travels. The bright yellow cabs and rumbling trams really caught our eye! Did you know that #Kolkata has the oldest running electric tram system in Asia? #AmazonFestiveYatra pic.twitter.com/uMSMINPn2e

The #AmazonFestiveYatra met some our customers in #Mumbai too! pic.twitter.com/A8kKGxdhhj

In the Ashram we tried our hands at Gandhiji’s Charkha 😊 #AmazonFestiveYatra pic.twitter.com/vje7iXD2QO

The #AmazonFestiveYatra is in the city of Indore; the home of moonwalking cop Mr. Ranjeet Singh! Watch him control traffic in style! #IncredibleIndia pic.twitter.com/4EN2WDTFTb

The #AmazonFestiveYatra is in a new city today! Can you guess where? #Amazon #IncredibleIndia pic.twitter.com/mX3ADY87xb

#AmazonFestiveYatra made a stop in the city of Nawabs and the House-on-Wheels had a #Lucknowi touch, with products sourced through Amazon India from local sellers. We also caught up with some of our sellers, delivery associates and I Have Space partners. Stay tuned for more from our #LucknowDiaries!

We also got talking to customers, and even met up with some sellers!😊 #AmazonFestiveYatra #Agra pic.twitter.com/NG9OMC585v

From one iconic city to the next! The #AmazonFestiveYatra has been on the move. Guess where?

Hint: This city is home to a monument that’s considered the ultimate declaration of love. It has over 4-8 million visitors annually! pic.twitter.com/gk9FvfpKBj

Capturing the flavour of a city like Mathura is tough, but as we drove along and spoke to customers they made the task easier for us. Watch glimpses of the yatra in Mathura here:

The #AmazonFestiveYatra made a quick stop at the historic city of Mathura today. We got a chance to explore some of its famous landmarks and markets. We even caught up with some of our customers! pic.twitter.com/4oa17evvgk

DO UP YOUR LIVING ROOM

What is the house-on-wheels?

It's about bringing the best of India together in one place - which is a truck! Actually three trucks, which when joined cover an area of 1050 sq feet. We are calling it the house-on-wheels. Can't imagine it? Well, see it for yourselves in the video below .

Amazon House of Wheels - inside view

Amazon StoriesGreat Indian FestivalAmazon PayDevicesOperationsSeller Success StoryAmazon Festive Yatra
How did you like this story?
Yawn
It's OK
It's Good
It's Great
I love it!
242 Ratings
Thanks!
Supporting small business

Amazon India has partnered with Startup India to launch a Startup Accelerator that can boost ecommerce exports from India and help local businesses realize their global ambitions. Read on...
Continue reading
Devices

From freezing temperatures of Srinagar, comes this heartwarming tale of customer obsession. Read how our Delivery Associate went on horseback to deliver packages in Srinagar.
Continue reading
Track our Great Indian Festival 2020 updates
Nov 11
Continue Reading
X
Out for Delivery
Thank you!
Please try again
Quick news and rich insights from inside Amazon, delivered directly to your inbox every few weeks.
Check your inbox shortly for your very first Out for Delivery email. We’ll reach out every few weeks with more.
If you’re not redirected back to the blog in a few seconds, click here.
Looks like we had some trouble authenticating your entry. Let’s try again...
Amazon Privacy Policy | Opt out anytime
Return to video player ➡ 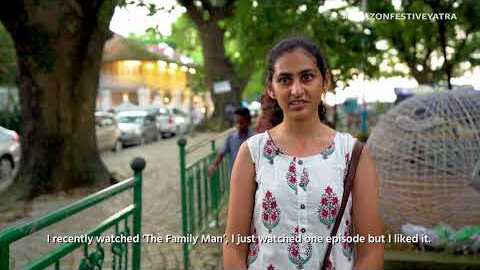