As per leading research agency Nielsen*, Amazon.in witnessed the highest share of transacting customers & purchases across all online shopping platforms in the first 5 days of the Great Indian Festival period.

“The first wave of the Great Indian Festival was our biggest celebration ever with Amazon.in -- witnessing highest share of transacting customers and purchases across all marketplaces in India; orders from 99.4% pincodes; over 65,000 sellers from 500+ cities receiving orders in just five days and customers from over 15,000 pin codes joining Prime.” said Amit Agarwal, Senior Vice President and Country Head, Amazon India. “We are especially excited to see that small businesses across India are embracing technology to find success with Amazon by serving customers with the largest selection of products at great value & convenience,” he added.

· Customers from 99.4% of India’s postal codes placed an order during the Great Indian Festival.
· Customers loved Amazon.in Hindi recording a 4.6X increase in new customers coming through Amazon.in in Hindi. The site saw a 2.5X increase in traffic and 3.6X increase in unit sales
· 62% of customers who placed orders for appliances had them delivered and installed within 36 hours
· 50% of Prime members who placed their order in the first 2 days had them delivered within 48 hours
· 50% of orders for large appliances were delivered in just 48 hours.
· On the busiest day, there were more than 600 flights delivering packages for our customers
· We delivered to customers in far and remote locations like Longewala (Thar Desert), Jaigaon & Lepchakha (West Bengal), Chapi (Mizoram), Kaho & Dibang (Arunachal Pradesh), Dhanushkodi (Tamil Nadu), Siniolchu (Sikkim), Sonbarsa (Bihar), Leh(Ladakh), Pipar(Gujarat) among others

· Customers from over 15,000 pin codes joined Prime with a 69% increase in signups from small towns as compared to the Festive Season `18.
· Amazon.in received orders from Prime members from 94% pin codes in India
· The event accounted for the highest purchases by Prime members who shopped across categories like large appliances, smartphones, grocery and Fashion. Top selling products included Echo Devices, FireTV stick, Samsung Galaxy M30s, MI band4, One Plus 7, Aashirwad Salt

Budgets did not get in the way of shopping

· 15x growth led by brands like Samsung, OnePlus, Apple, Xiaomi and Vivo. New Launches saw great customer demand and traction, with M30s becoming the Bestseller on the day of launch. Vivo U10, OnePlus 7T were top performing products
· 80% growth for OnePlus over Great Indian Festival’18 with over INR 700 Cr of sales
· Samsung saw a growth of 5X compared to Great Indian Festival’18 led by stellar performance of the M Series and good demand for Samsung A series and Samsung Note 9. Redmi 7 emerged as the top seller in terms of unit sales. Models like Mi A3, Redmi 7A, Redmi Y3 and POCO F1 also saw great demand. Vivo grew 4X compared to Great Indian Festival’18 led by Vivo U10
· Sold as many Apple smartphones during this period as compared to total YTD sales
· 1 out of 3 Premium Smartphones were bought on EMIs; 1 out of 3 iPhone XR were bought on EMIs; Over 40% of OnePlus 7T phones were bought on EMIs

· Large Appliances category saw an 8X growth. Almost half of the sales came from lower tier towns powered by brands like Godrej, LG, Samsung and Whirlpool.
· 50% customers availed EMI to stretch their budget and every 1 in 5 customers upgraded their appliances with exchange.
· During this time, every 1 out of 3 fully automatic washing machines being sold in India was on Amazon.in. Every 2 out of 3 side-by-side refrigerator sold in India was on Amazon. Every 1 in 2 Dishwashers sold was on Amazon.in
· Twice as many TVs were purchased during this time than Festive Season’18
· 1 in 2 TVs sold in Amazon.in were 4K & Large Screen TVs with OnePlus being the Number 1 Premium TV
· 1 of 3 Premium TVs were bought on EMI

· Echo: This was the biggest ever sale event for Echo Devices which saw a 70X growth
· Fire TV: Fire TV Stick continues to be loved by the customers with a 30X growth
· Alexa Smart Home devices: Smart lights that work with Alexa were one of the highest selling products with a 75X increase.
· Alexa built-in Devices: Witnessed a 30X growth led by brands like Sony, TCL and Motorola.
· Kindle: Readers across the country loved offers on Kindle clocking a 10X growth.

· Furniture category grew by 4X vs led by brands like Sleepwell, Sleepyheads and Wakefit.

“We, Ibell, are a Kerala based brand expanding our national presence through Amazon with 85% sales from outside Kerala from ~3,000 pin codes across 350 cities. We offer over 300 products across home appliances and industrial tools and have grown 12X on order units in the Great Indian Festival over last year’s event. We attribute this jump to the 30 member all women team running Seller Flex and support operations to the dot to maintain fastest of deliveries,” said an elated Abbas from iBell

Similar sentiments were echoed by Mr. Chitranjan of Odisha Handloom selling through Amazon Karigar “We received orders for our Sambalpuri sarees from 21 different states and 2 union territory across India! We have seen a 3X growth. I am overwhelmed with the response we have received during this sale event.”

Shital Mehta, CEO Max Fashion said, "We are delighted with our partnership with Amazon Fashion and the festive season has started with a bang, with Max featuring as one of the top brands in the Amazon apparel category. Max Fashion offers affordable and trendy products to our customers pan India and families have lapped up our deals and our special festive lines. We have not only received unprecedented growth from Tier 2 cities, but orders have flown in from as far as Leh, Guwahati and even Port Blair. We are thrilled with the reach that Amazon.in has given us, reaching customers based in the farthest corners of this country”

Great Indian FestivalEcho ShowDevicesSeller Success Story
How did you like this story?
Yawn
It's OK
It's Good
It's Great
I love it!
8 Ratings
Thanks!
AWS

"Alexa, where can I get a COVID vaccine?”

An internal grassroots effort celebrates delivery partners in the Amazon delivery network during Prime Week, Amazon India’s largest event of the year.
Continue reading
Track our Great Indian Festival 2020 updates
Stay informed with the latest updates on the summit that puts forth how Amazon and our partners leverage digitization, technology & our ecosystem to drive infinite possibilities for India.
Continue Reading
X
Out for Delivery
Thank you!
Please try again
Quick news and rich insights from inside Amazon, delivered directly to your inbox every few weeks.
Check your inbox shortly for your very first Out for Delivery email. We’ll reach out every few weeks with more.
If you’re not redirected back to the blog in a few seconds, click here.
Looks like we had some trouble authenticating your entry. Let’s try again...
Amazon Privacy Policy | Opt out anytime
Return to video player ➡ 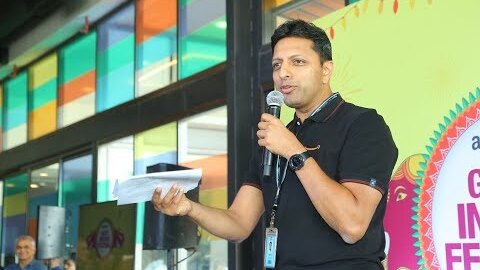