‘Raising the bar’ on accessibility and inclusion at Amazon

Amazon employees and partners around the world share stories of their accessibility and inclusion efforts during the 75th observance of National Disability Employment Awareness Month.
By Day One Staff

“Every person with a disability should expect to be treated as equivalent to everyone else—to know that Amazon supports them in being successful at what they do,” said Brendan Gramer, a Senior UX Designer on the Payments team at Amazon. As Global President of the People with Disabilities (PwD) affinity group—a group that serves as the representative voice for Amazon employees with disabilities—Gramer is one of the many people who help make Amazon one of the best places to work for disability inclusion.

This October, during the 75th observance of National Disability Employment Awareness Month (NDEAM), we’re highlighting employees and partners like Gramer who promote accessibility and inclusion in our workplaces around the world. From PwD affinity group presidents and co-chairs, to individuals supporting hiring initiatives and events that promote inclusion at Amazon, we’re pleased to introduce seven leaders, innovators, and allies advocating for Amazon employees with disabilities.

When he took on the role of Global President of PwD last December, there were four chapters. Now, the group has grown to include 39 chapters and continues to expand around the world—recently creating chapters in South Africa, Germany, France, Luxembourg, and soon, Spain, Italy, and Egypt. Their goal is to have at least 50 chapters in development by the end of the year, and exceed 100 by the end of 2021.

“People are becoming more aware of the need to be inclusive, and of the unique value we bring to Amazon through our diverse perspectives,” said Gramer. “We want Amazon to be the most inclusive and accessible employer on the planet, and that means working to normalize disability so that people with disabilities have every opportunity to be accepted and as successful as their peers.”

The affinity group has had a positive impact on the lives of thousands of employees at Amazon, and Gramer said the group’s goals for continued global expansion reach beyond company walls.

“Oftentimes, disability rights laws only get updated because of the disability community’s advocacy. Amazon is a global company, so it presents an opportunity to influence the world,” said Gramer.

There are more than 2,600 PwD group members in chapters around the world. As the group continues to grow, Gramer hopes its members will make more connections, find support, and spark global change.

“It is amazing what people can do when they connect with each other for support.”

Mrunmaiy Abroal, Amazon’s PwD India affinity group
“In India, you won’t see a lot of people with disabilities up and about in a mall or on the road because most things are not accessible,” said Mrunmaiy Abroal, a PR Manager on the Devices team in India. “If others don't see people with disabilities, they will never realize the need for accessibility.”

That’s why she started a chapter of Amazon’s PwD affinity group in India.

“I got to know the global PwD affinity group and how they advocate and build sensitivity within the organization for other people with disabilities,” said Abroal. “I thought that was something that really needed to be brought to India.”

Abroal formed PwD India earlier this year. The group already has 230 members and five board members. “It's very encouraging to see that a lot of people are supportive and want to help their colleagues move forward,” she said.

Abroal has started connecting group members through email newsletters and has plans to expand the group’s impact virtually.

“I want to start a new series, similar to humans of New York and Mumbai, to profile more people with disabilities and give them visibility internally with employees and externally on our India blog.”

Outside of Amazon, Abroal promotes visibility for people with disabilities through her personal blog, “Wheelchair Wanderer,” where she shares stories from her travels and life experiences as a person with a spinal cord injury. She also works with the Spinal Foundation to spread awareness for reimagining life after a spinal cord injury.

“I wish to inspire people with disabilities to not put their plans on hold while the world around us takes its time to become more inclusive and accessible,” said Abroal.

Shams Hussamy and Lisa Livingston, March of Dimes Canada
Amazon partners with the March of Dimes Canada on the Alternative Workforce Supplier Program (AWSP), a staffing program tailored to meet the needs of individuals who have traditionally faced obstacles to both entering and advancing in the workplace, beginning with people with disabilities. 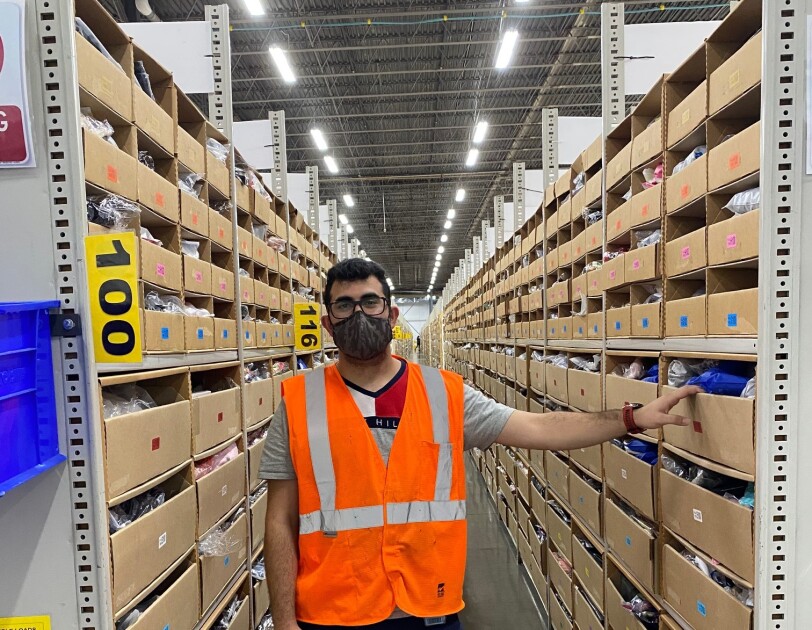 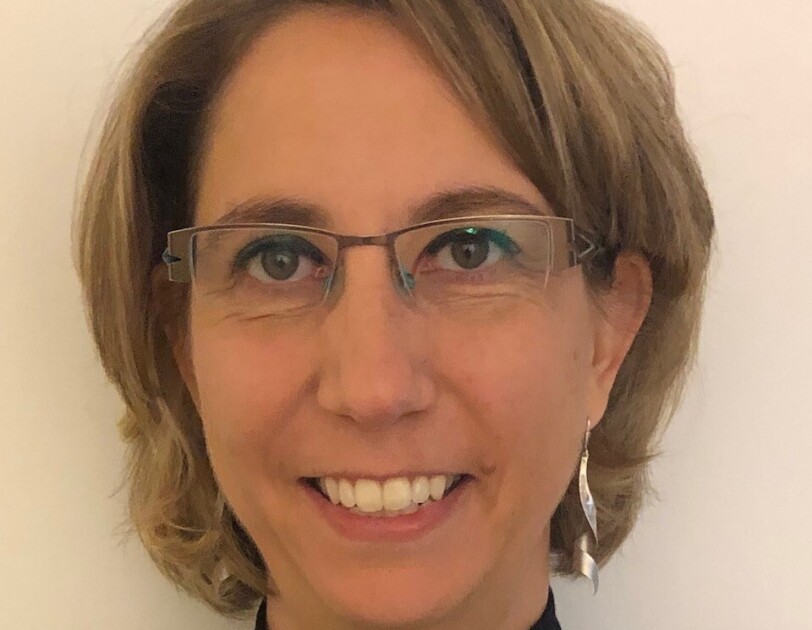 “We have a full-time recruiter who has relationships with other agencies in the community, as well as a full-time job coach who supplements the Amazon learning team, providing individualized support to AWSP associates,” said Livingston.

Shams Hussamy, an Associate at an Amazon warehouse in Ontario, is one of the employees March of Dimes Canada works with.

On his previous experiences with the job market, Hussamy said, “I had trouble finding a job, and every job I had didn’t offer much support.” He continued, “Through March of Dimes Canada, I was able to get a job at Amazon.”

Hussamy celebrated his one-year anniversary working at Amazon this month. “I was very nervous at first but, I was happy to see that there was so much support for me to learn my job, lots of training, and smiling faces rooting me on,” he said, recalling his first weeks on the job.

Working with Livingston and the March of Dimes Canada team, Hussamy has enjoyed learning new skills and growing in his role over the past year. “I continue to get support from my job coach from March of Dimes Canada and this helps me to feel more relaxed about starting new roles and reaching my goals,” he said.

Hussamy was among the first group of employees hired through AWSP in Canada. March of Dimes Canada has since helped Amazon recruit more than 40 associates in Ontario through the program.

JoAnna Hunt, Amazon’s A11yCON
“I had the realization a long time ago that the barriers people with disabilities face are largely artificial. I believe those barriers shouldn't exist,” said JoAnna Hunt, a Principal Product Manager leading the Kindle Accessibility team.

That’s why she worked with a team of colleagues to create A11yCon, an annual event where Amazon employees around the world listen to speakers and colleagues discuss accessibility in the workplace during National Disability Employment Awareness Month.

“Our primary goal has always been to create an event where employees with disabilities feel safe and comfortable to share some of the challenges they’ve faced in an effort to affect change,” said Hunt.

This October marks the third-annual A11yCon event. The program will be completely virtual, including personal stories and insights from internal and external speakers.

Hunt said, “We're bringing in a really powerful set of speakers to talk about awareness, history, and context, but who will also celebrate the culture and whole lives of people with disabilities.”

Hunt described that during previous events, allies of employees with disabilities have shared examples of how A11yCon has positively impacted their outlook on inclusion.

“We've seen managers, leaders, and peers change the way that they interact with their teams,” said Hunt. “They’ve changed the way they run meetings and communicate.”

As an ally to colleagues with disabilities, Hunt said the best thing she and others can do to advocate for their peers is “listen more and talk less.” She added, “It’s important for allies to recognize that the challenge doesn't lie with the person with a disability; the challenge lies in the environment in which we are asking them to work. Once we understand that, we can work to change it.”

The two launched PwD Japan in September 2019. More than 200 Amazon employees attended the event to celebrate its launch. According to Umezawa and Obata, PwD Japan now has more than 300 members.

“We noticed a demand for a PwD chapter in Japan. There were a lot of people who wanted to support it,” said Obata. “This support for the chapter came from peers and senior leaders.”

The group started out holding learning sessions and lectures on disabilities for employees in Japan. Prior to the pandemic, they also had a casual, monthly luncheon for group members. In light of physical distancing guidelines, they’ve swapped the in-person lunches for virtual coffee hours.

“Our current goal is to provide a safe place for employees with disabilities during these tough times,” said Obata.

Next up, Umezawa, Obata, and their fellow PwD Japan leaders plan to launch a community tool as well as a book club to continue to connect Amazon employees with disabilities and allies in Japan.

“We’ve been happy to hear from people who find the affinity group to be a safe place to discuss disabilities,” said Obata. “Our affinity group is still quite young, and we have a lot of opportunity for growth.”

National Disability Employment Awareness Month is a time to highlight conversations about accessibility, inclusion, and opportunities for people with disabilities in the workplace. However, the work must be ongoing to spark positive change. Through continued awareness in our communities and workplaces, we can raise the bar on accessibility and inclusion.

How did you like this story?
Yawn
It's OK
It's Good
It's Great
I love it!
6 Ratings
Thanks!
Supporting small business

More than 70,000 Indian exporters on Amazon’s Global Selling program are geared up to showcase millions of Made in India products to customers across the world on the annual Black Friday and Cyber Monday sale. Read on to know more...
Continue reading
Our Business

'We are inspired by the undeterred entrepreneurial spirit of India'

Customers in India can now converse with Alexa in Hindi on their Fire TV devices. The experience includes Hindi interactions for Alexa on Fire TV, local knowledge & information, hundreds of skills and more in Hindi. Customers who choose Hindi as their device language will also see Fire TV rows and menus in Hindi. Hindi language support will be available starting today on all Fire TV devices in India.
Continue reading
Track our Great Indian Festival 2020 updates
Nov 11
Continue Reading
X
Out for Delivery
Thank you!
Please try again
Quick news and rich insights from inside Amazon, delivered directly to your inbox every few weeks.
Check your inbox shortly for your very first Out for Delivery email. We’ll reach out every few weeks with more.
If you’re not redirected back to the blog in a few seconds, click here.
Looks like we had some trouble authenticating your entry. Let’s try again...
Amazon Privacy Policy | Opt out anytime