With the conclusion of the 25-days long extravaganza of the Amazon Festive Yatra, the month long journey ended with the endowment of a noble cause. The selection of products from the unique “house-on-wheels” which contained items from sellers across India, were auctioned and the proceeds went to Akshaya Patra’s funding of mid-day meals for the girl child.

The fund raiser contained as many as 600 products bulk of which were unique handicrafts by local artisans such as Rogan art painting from Gujarat, brass & marble showpieces from Uttar Pradesh, Tanjore paintings from Tamil Nadu and Dokhra art of Chhattisgarh, to name a few. Many Amazon employees participated in the auction and contributed to the purpose.

A collaboration for a cause

Amazon had first collaborated with Akshaya Patra foundation in 2017 – 18 for The Ksheera Bhagya Scheme which provides protein rich and nutritious glass of milk and biscuits five days a week to 1,40,000 children in Government and Government aided schools in Bangalore, Karnataka. This festive collaboration is another step in Amazon’s two years association with Akshaya Patra Foundation.

Regarding this collaboration with Akshaya Patra, Manish Tiwary, VP - Category Management, Amazon said, “At Amazon we firmly believe that our success is connected to the growth of the entire ecosystem and therefore we work with more than half a million small businesses across the country including local craftsmen, women entrepreneurs and emerging traders. The #AmazonFestiveYatra was a testament to this sentiment, to show our customers that we bring the best of India to them for the festive season.”

Referring to the initiative he added, “The joy of giving is widespread amongst Amazonians during the festive season and we have decided to support the cause of the girl child in various ways like employee fund-raising and volunteering. As this is a cause close to our hearts and having worked with Akshaya Patra for a few years, we partnered with them and look forward to more such collaborations to make lives better.”

Overwhelmed with the response and the overall vibe at the auction house, Minari Shah, Direction - PR, Amazon said, “Apart from the joy of giving, there was also a lot of goodwill, generosity and laughter in the fund-raiser and this made it really special. Apart from that it was so much fun to be a part of such an honorable cause.”

Speaking about Akshaya Patra Foundations association with Amazon India, Shridhar Venkat, CEO - Akshaya Patra Foundation said, “The festive season for us is about gathering support from across the country to ensure that every child in India sleeps with a full stomach. Amazon has been a generous and thoughtful partner, using its scale & scope across the country to contribute in a meaningful & effective manner. The proceeds will surely help in more girls coming to schools for education. We are grateful for the partnership and the sentiment to support the empowerment of the girl child in India.”

Great attitude and positive vibes is what truly defined this event! The event was hosted by RJ Prithvi of Fever 104 FM fame. A few select invitees and Amazonians took a break off their work and daily routine to participate in the auction. The energy of the emcee was matched by an equally zealous audience as paddles kept going up in the air for every bid without any lull. One could see that the festive and generous spirit of the crowd was as palpable as the exuberance of the affair.

India DiariesDeliver SmilesSpirit of IndiaGreat Indian FestivalAmazon StoriesAmazon Festive Yatra
How did you like this story?
Yawn
It's OK
It's Good
It's Great
I love it!
121 Ratings
Thanks!
Our Business

We caught up with Amit Agarwal, Country Head, Amazon India to talk about Jeff Bezos’ recent visit to India.
Continue reading
Our Business

Empowering entrepreneurship and working towards a sustainable India

Entrepreneurship is at the core of all the success stories of sellers, innovators, artisans and brands at Amazon India and we are humbled to have enabled their journeys in some way.
Continue reading

Women carve a niche in the biz world

This Republic Day Amazon India salutes the country’s women entrepreneurs and acknowledges their skill and silent dedication in taking the nation forward.
Continue reading
Amazon to invest US$ 1 billion in India to help digitize SMBs
New investment will enable US$ 10 billion in cumulative exports by Indian businesses selling on Amazon worldwide by 2025
Continue Reading
close
Out for Delivery
Get the latest news and stories from Amazon, delivered right to your inbox.
Sign Up
Return to video player ➡ 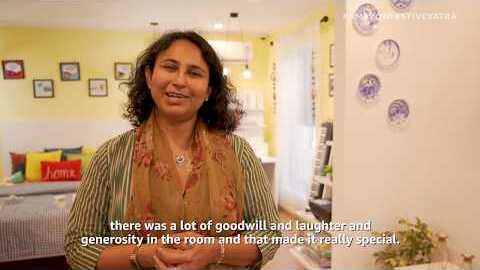