What it’s like to change careers, after a long haul in the armed forces

Three former veterans share their stories of transition and deliberate on their learnings...
By Day One Staff

Anubhav Mishra, an Operations Manager at Amazon in Hyderabad heads a 400-member team, which safeguards the interest of global sellers from copyright infringements and ensures seller compliance to listing policies. But this was not his life for a long time. Mishra had been a commander in the Indian Navy for over two decades until 2018. During his tenure, he had been part of two landmark operations in 1999 and 2001. Needless to say, when Mishra made his way to Amazon, he needed serious acclimatization. “Just being glued to a device seemed something reckon with. We used laptops and computers rather sparingly in the armed forces,” he reflects. It takes some doing to shed old skin - the military culture and here is where a well thought out onboarding model, with a support circle becomes critical for people. “Amazon’s buddy and mentor model really helped me make the transition and figure out how it all works, it is a great source of support system to lean on, especially early on,” said Mishra.

Aparna Gulati, a manager in the seller flex middle-mile pickup at Amazon in Gurgaon recounts her experience of joining Amazon India in the early days of the COVID-19 pandemic breakout in 2020. “My reporting manager reached out to me even before I joined and made sure I had everything necessary to start and ensured all teething issues were ironed out,” said Aparna. This, Gulati points out, is similar to the induction process in the forces so she felt comfortable immediately.

Saluting the veterans at our workplace

The culture is different and there are points of confluence

Although the work culture of the armed forces is unique, veterans found synergies. “My job was to fly over the ocean and identify whether a ship is a friend or a foe. Our mission was a one-line statement; everything else was ambiguous,” said Bangalore based Arun Kumar Singh, now general manager of operations of Amazon transportation services. “We watched over the vast ocean; our eyes peeled for clues. We were required to keep our ears and eyes open, be alert to what is going on in our immediate environment, build on intelligence and make assessments. I was responsible for the people in the aircraft – it was a matter of life and death,” he added.
Singh was second-generation military personnel and served the forces for a decade until his plan to become a permanent commission officer in the navy did not work out. He joined Amazon in 2012, in the early days of setting up shop in the country. “I was given a single line goal – launch last mile operations in Mumbai – pretty similar to the succinct commands I was used to. I had to go out on a limb with a small team, build processes that could scale from scratch and figure out how best to connect people,” Singh reflects.

Echoing the same sentiment, Mishra said that the armed forces required him to pre-empt rigorously and always be a few steps ahead of the opposition’s thinking. “We made decisions based on little information and safeguarded people’s lives; the notes are similar even now – detecting fraudulent practices, maintaining checks and balances, weeding out the so-called bad actors takes me down a similar thought process, which is ever evolving, you never know how sophisticated the next attempt could be, you have to predict, prevent and protect customers,” he affirms.

Army to corporate world, Amazon veteran speaks of the transition

Aparna adds that apart from skill-based linkages, it takes a while to adjust to other aspects of the corporate culture, which are distinctly different from the armed forces. For instance, diversity. “It is true that the percentage of women in Army is far less than men. But we are trained and groomed in the same manner and expectations from women officers are no different. It’s pretty much the same at Amazon,” Aparna said. Mishra too attested that working in a more gender-neutral environment has been a learning curve but the armed forces prepared him to be more inclusive. “We worked with people with disabilities often, assigning them to suitable functions so I am trained to be sensitive to others’ needs,” he said.

Aparna, a third generation officer joined the armed forces in 2004 and she put up her paper for premature release as Major after serving the army for 12 years. She is now part of the team responsible for planning and executing shipment pickup and operations from external fulfilment nodes in north India. In the army too, her key responsibilities involved managing a process related to logistics (Supplies and Transportation). “The main difference is that Army is a very process driven organization you have Army order to cover any situation/exception. However, in corporate we need to adapt or create new processes in tune with the dynamic business requirement, like in my current role in Amazon, I am also working on cost saving measures too. – this is a new learning I have picked up and I feel more confident about that,” she said. For Mishra, Amazon’s leadership philosophy, “Are right, a lot” is a north star. The philosophy elaborates that leaders are right, a lot. They have strong judgment and good instincts. They seek diverse perspectives and work to disconfirm their beliefs. Mishra leans in on this and uses it to hone a deeper sense of intuitive thinking whereas his decisions in the navy hinged heavily on hard and tangible facts.

The typical philosophies underpinning decision-making, discipline and psychological resilience in the armed forces models the quality of leadership organizations strive to build. As per media reports, more than 70,000 officers resign the forces aged below 40 every year; most have over a decade of experience. When Singh enrolled into a six-month general management course at IIM Lucknow and sought to build a career in the corporate world, he did not know what to expect. “I was 32 and until then, my life had been deeply entrenched in the military forces, I had seen nothing outside of it. Business school became a vehicle for me to really get out of my uniform,” he reflects. He was hired for a position at Amazon during the placement process, which is now inspiring new plans. “I belong to a farming family in Bihar and one day, I hope that I can do something to spur technological adoption and improve the community at a grassroot level, that’s my dream,” said Singh.

What has he learnt from his stint, which is fueling his dream? For starters - that stuff of fiction is absolutely possible. “I think the ability to conceive of things, which are seemingly impossible is a learning. I have seen first-hand the opportunities Amazon scaled last year; there were no guidebooks, no concrete, clear-cut answers, going into a pandemic, what needed to be done and, we served and leveraged on a scale, unimaginable before,” said Singh

Amazon StoriesWorking At AmazonOperationsVeteransHiring our heroesDiversity
How did you like this story?
Yawn
It's OK
It's Good
It's Great
I love it!
11 Ratings
Thanks!
Entertainment

As Prime Day nears, we catch up with Gaurav Gandhi, Prime Video Director & Country Manager, where he speaks about the Prime Day line-up for 2021, his message for Prime customers, why good content transcends language barriers and lots more...
Continue reading
Supporting small business

Sharda Ugra’s upcoming book release on Prime Day looks back, a decade after India’s incredible win, captained by the inimitable MS Dhoni
Continue reading
Track our Great Indian Festival 2020 updates
Stay informed with the latest updates on the summit that puts forth how Amazon and our partners leverage digitization, technology & our ecosystem to drive infinite possibilities for India.
Continue Reading
X
Out for Delivery
Thank you!
Please try again
Quick news and rich insights from inside Amazon, delivered directly to your inbox every few weeks.
Check your inbox shortly for your very first Out for Delivery email. We’ll reach out every few weeks with more.
If you’re not redirected back to the blog in a few seconds, click here.
Looks like we had some trouble authenticating your entry. Let’s try again...
Amazon Privacy Policy | Opt out anytime
Return to video player ➡ 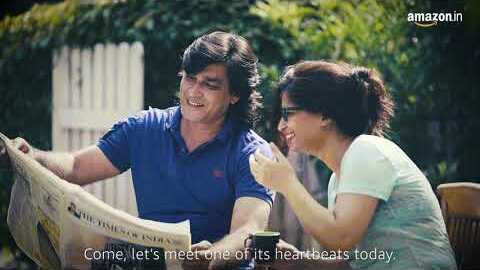